Briella was diagnosed with CP when she was 2 years old. October 2020, she and her family found out that her hips have been abducting out and Briella’s physical medicine and rehab (PM&R) doctor was going to put her through double hip surgery immediately. Not wanting to put her daughter through another major surgery, Caroline, Briella’s mother, posted on Instagram looking for ways to avoid hip surgery. A physical therapist reached out to her through Instagram and suggested a daily standing program including hip abduction with a Zing Stander may be the answer.

Briella has been full of surprises her entire life. Before being diagnosed with Cerebral Pasley, Briella was born six weeks early. And before being born six weeks early, Briella was diagnosed with situs inversus totalis, which means that her heart is on the right side of her body compared to her left. “Then, at 21 months we finally did her MRI, and we got the phone call that she had PVL – periventricular leukomalacia – caused basically by a lack of oxygen and being premature. So, her official diagnosis is spastic diplegia cerebral palsy,” Caroline, Briella’s mother. After the diagnosis, there was a feeling of ‘what do we do next’ for Caroline and Matt, Briella’s father. “The doctors gave us our diagnosis and kind of just said, ‘okay, now go live,” Matt recalls. This confusion became hours of research; and then, eventually, led to the creation of the Briella & Me Instagram page.

She’s been a fighter her entire life
– Caroline, Briella’s mother

What is a CP Warrior?

Cerebral Palsy (CP) is the most common motor disability in children. It is a group of disorders that commonly affects movement, balance and posture. It deals with both the brain (cerebral) and the muscles (palsy).

The creation of the Briella & Me Instagram page connected Briella and her family with many other children with CP and their families. These children, and Briella, are known as “CP Warriors.” The Instagram page showing Briella’s daily living, fun activities and physical therapies started to receive fans from all over the world. Briella’s amazing smile paired with Caroline and Matt’s willingness to try new/unique therapies led to an outpouring of support. What Caroline found out, is that the Instagram page is not just about connecting these CP Warriors and their families, but also about being able to share ideas, support and find those new and unique therapies that can be game-changers for the CP Warriors. 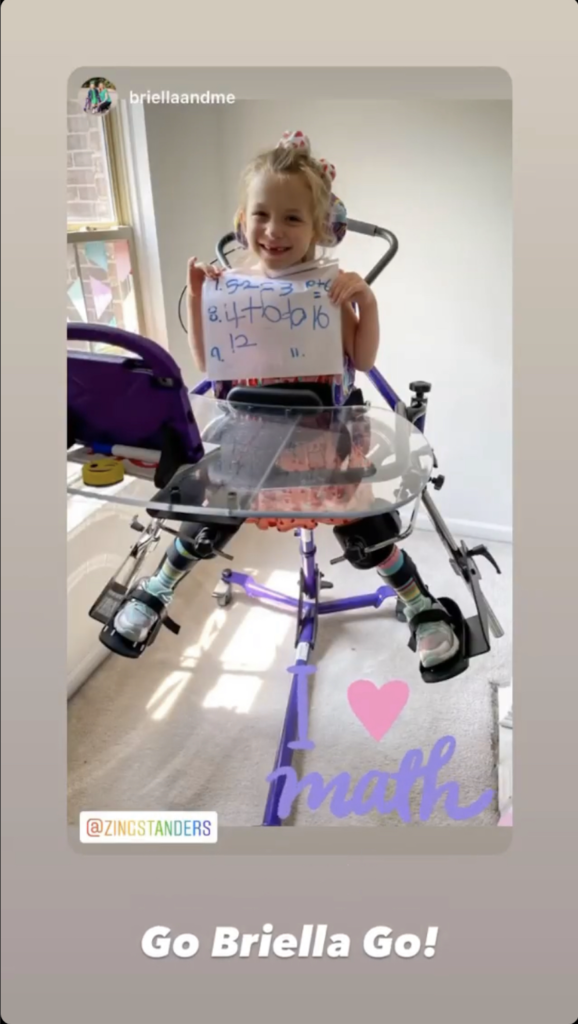 Briella does a standing program every day for 1 to 2 hours per day with 30 degrees of Hip Abduction in each leg. During her standing sessions, she does other fun activities like painting, writing, playing with playdough and many more! 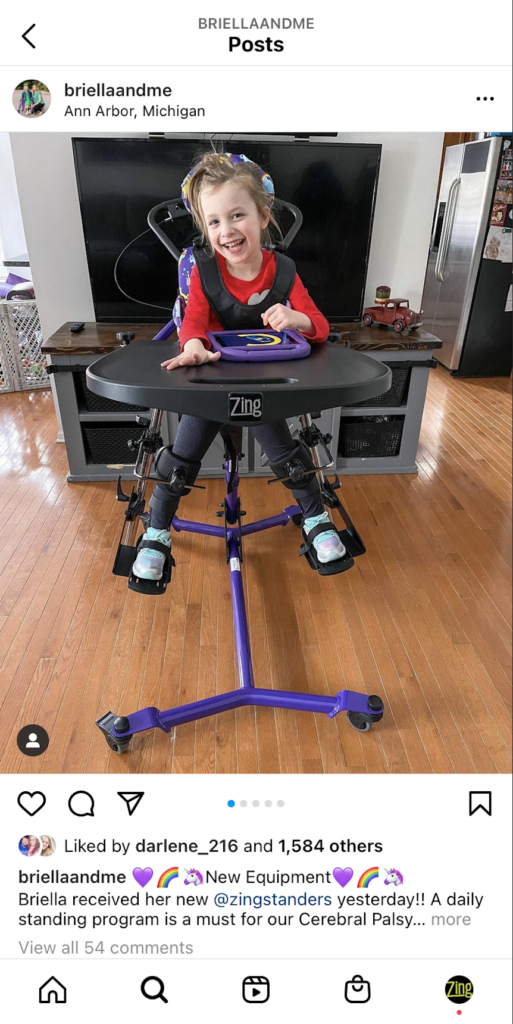 Once Caroline found out that standing in abduction for 1-2 hours per day can help reduce the need for surgery, she went through the process of ordering a Zing MPS Size 1. 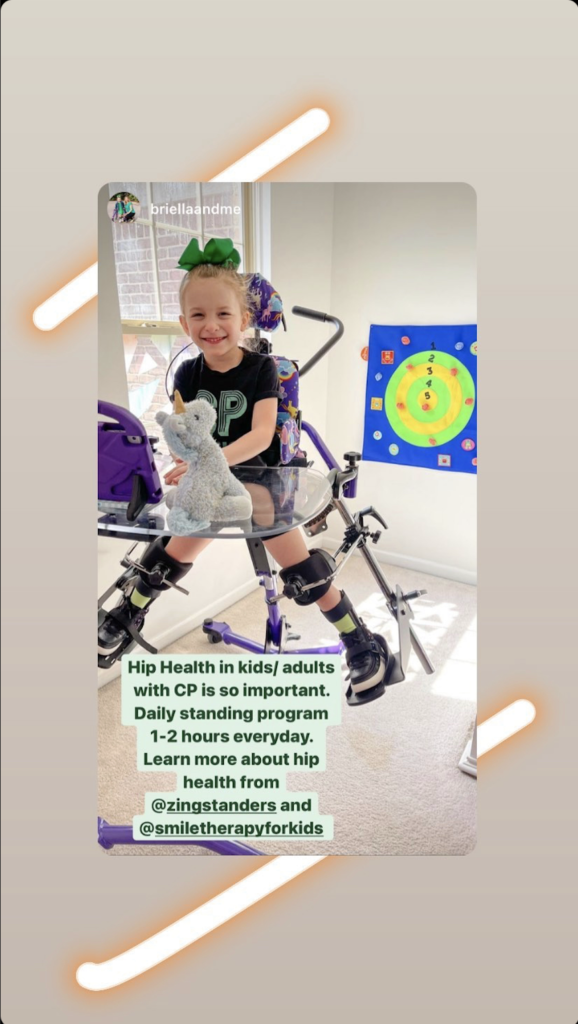 How would you use a Zing MPS?

The versatility of the Zing MPS means it can be used as an activity chair, feeding table and many other activities all while the child receives the benefits of standing and standing in abduction.

From two years old when Briella got her diagnosis. She has been having hip X-Rays every 6 months. For four years, Briella’s hips had stayed stable. But, at age 6, they became unstable – migrating out of her hips by 30% on both sides – and the doctors wanted to immediately have guided-double hip surgery. Even with all of the different physical therapies that Briella had been doing, another major surgery seemed inevitable, but Caroline was not satisfied with having to turn to surgery. She decided to, once again, turned to Instagram to try and find a solution. The solution she found? Zing Standers. A physical therapist reached out to Caroline on the Briella & Me Instagram page after Caroline asked for suggestions and said that standing in abduction for 1-2 hours per day may be the solution to avoiding surgery *FIND OUT MORE ABOUT HIP ABDUCTION*. So, Caroline got in contact with her physical therapist, set up a fitting for the Zing MPS and eventually got approved, through insurance, to get the stander. Request your own FREE product demonstration with the button below.

Learn about the steps Caroline took to get Briella’s Stander Funded.

The Zing MPS and standing in abduction wasn’t the only reason why Briella was able to avoid hip surgery. Briella also attended two intensive therapy programs, one being NAPA center pop-up location in Chicago. Learn how intensive therapies go hand in hand with standing in abduction and home therapies to try and avoid hip surgery.

Find Out if a Standing Program is Right for You

We recommend a product demonstration/trial prior to purchase which helps ensure the correct product, size and support/positioning components are selected. It’s quick and easy, just fill out our contact form below.